Posted by Shurbhi.in at Saturday, August 18, 2007 No comments: Links to this post

Posted by Shurbhi.in at Tuesday, August 07, 2007 No comments: Links to this post 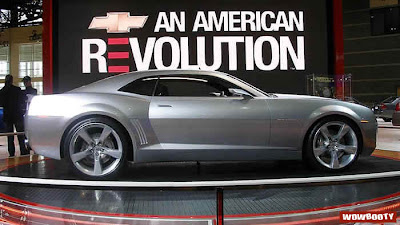 The all new pimped out, totally redesigned Chevrolet Camaro won't go on sale until the first quarter of 2009. It will use a rear-wheel-drive chassis being developed in Australia for use by GM's Holden brand headquartered there. A V-6 and a V-8 engine will be offered. The car will use a modern independent rear suspension instead of the bumpy-riding, tricky-handling solid-axle design of the original. The new car is meant to be a "modern interpretation of the 1969 model, considered by many to be the best design of the car's first generation," said Ed Welburn, GM's global vice president of design.
Posted by Shurbhi.in at Wednesday, August 01, 2007 1 comment: Links to this post